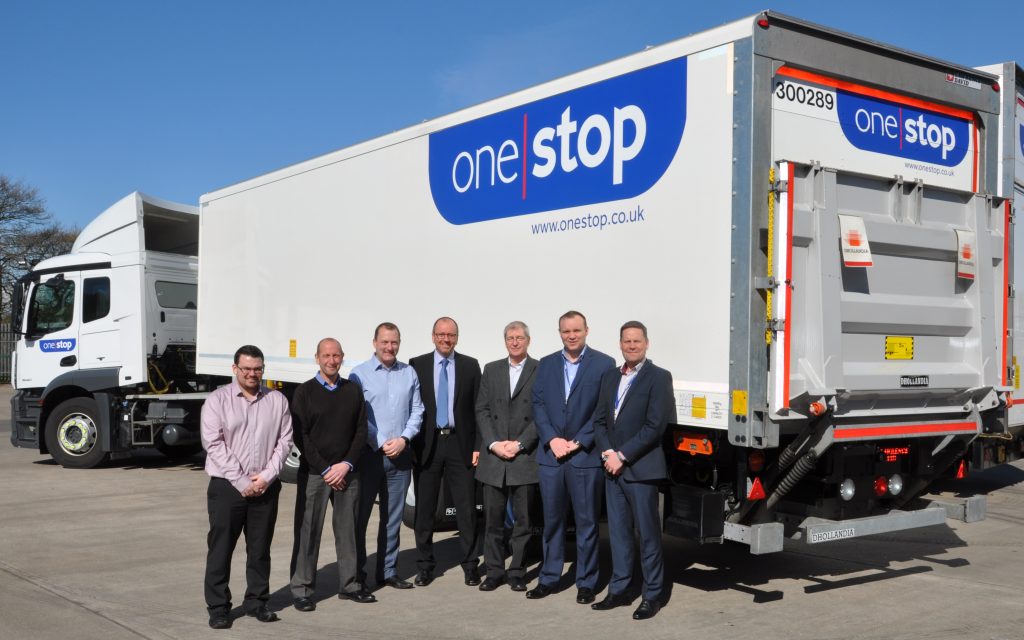 One Stop Distribution, the own-account transport arm of One Stop Convenience stores, has won the award for Operational and Compliance Excellence at this year’s Motor Transport Awards.

One Stop (Brownhills and Nursling sites) has been using TruTac’s ‘TruControl’ tachograph and compliance management software as part of its daily transport processes since 2006 and has significantly improved compliance and resource levels across a number of key performance areas. Not only has this led to improved KPIs, but has also improved driver education, behaviour and retention.

“Our distribution operation employs more than 500 people” comments Transport Manager Jon Price. “This includes 114 drivers, across three DCs in the West Midlands, the South and West Yorkshire. We make approximately 2,900 timed deliveries a week and dispatch around 20,000 cages to our convenience stores. With all this going on, we need an effective transport management system to help maintain an efficient and compliant fleet.”
The TruControl compliance system includes an infringement debrief facility. This enables accurate recording and reporting of all infringements to help educate and inform drivers. Additionally, digital tachograph records are downloaded twice a day and drivers are briefed before and debriefed after every shift.
One Stop also employs a compliance co-ordinator at each of its DCs to run infringement reports onto the traffic management system. From here each driver’s infringement ‘points’ can be tallied and monitored in order that milestones can be set prior to any disciplinary action being taken. Furthermore, the co-ordinators meet with their local management teams every week to discuss working hours, vehicle accidents and missing mileage.
In fact, during the last year, as the One Stop management team saw infringement levels improve, they moved to using the TruControl system to manage other areas such as driver and vehicle resourcing and ‘missing miles’. Sites were benchmarked against each other and significant improvements in their overall compliance levels were soon noticed. Wakefield started using TruControl in April 2013 and since then One Stop has successfully reduced its overall infringements by 51%.

“The TruTac system has brought us a host of operational and compliance benefits” adds Jon Price. “For example, the automated exception-based reporting system has minimised unnecessary reports and cut admin’ time – as it only highlights key data that requires attention. Also we were one of the first adopters of the infringement debrief system for a complete audit process of the driver debriefing process. Not only is this process fully adherent to our company policy but also we have reduced the time taken to debrief our drivers and improved the driver education and training process.”

According to One Stop, the system has significantly reduced risks and exposure to DVSA penalties across their multiple depots, drivers and vehicles. For further information on One Stop please visit www.onestop.co.uk .