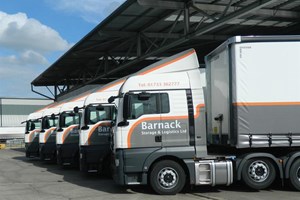 Barnack Transport Services, part of the Barnack Group, is using TruTac’s software to ensure compliance and says the system delivers everything needed at the touch of a button.

The in-house transport arm of the Peterborough-based group was only established in May this year, and transport manager Maurice Lane knew which software he wanted.

“I’d seen TruTac’s products demonstrated previously and was very impressed with the set up. So, when I changed job to come to Barnack, I contacted them directly and asked them to come and talk to us.”

As a start up, there was a lot to get in place in time for the May 2016 launch. “We now use pretty much everything TruTac do,” says Lane. “We use TruControl for driver-hours analysis, TruLicence for checking and verification of employees’ entitlement to drive, and the digicard-based TruTime for clocking in and out.”

The three components are proving invaluable in terms of time saving and compliance, he says. “The automated reports we get on a weekly basis give me a quick view of how we’re performing and whether we’ve got any issues needing attention, while the desktop view via the dashboard makes it very clear as to what the more detailed situation is at the touch of a button.”

Next on Barnack’s list is TruChecks, which allows drivers to record daily vehicle checks and report any defects in real time via an app on their mobile phone.

“Initially we had agency drivers rather than our own full time people, but that’s starting to change now, so we’ll be implementing TruChecks in the next three to four weeks,” Lane confirms.

“From my perspective the whole TruTac system gives me everything I require as a transport manager to keep an eye on what is happening in our operation.”